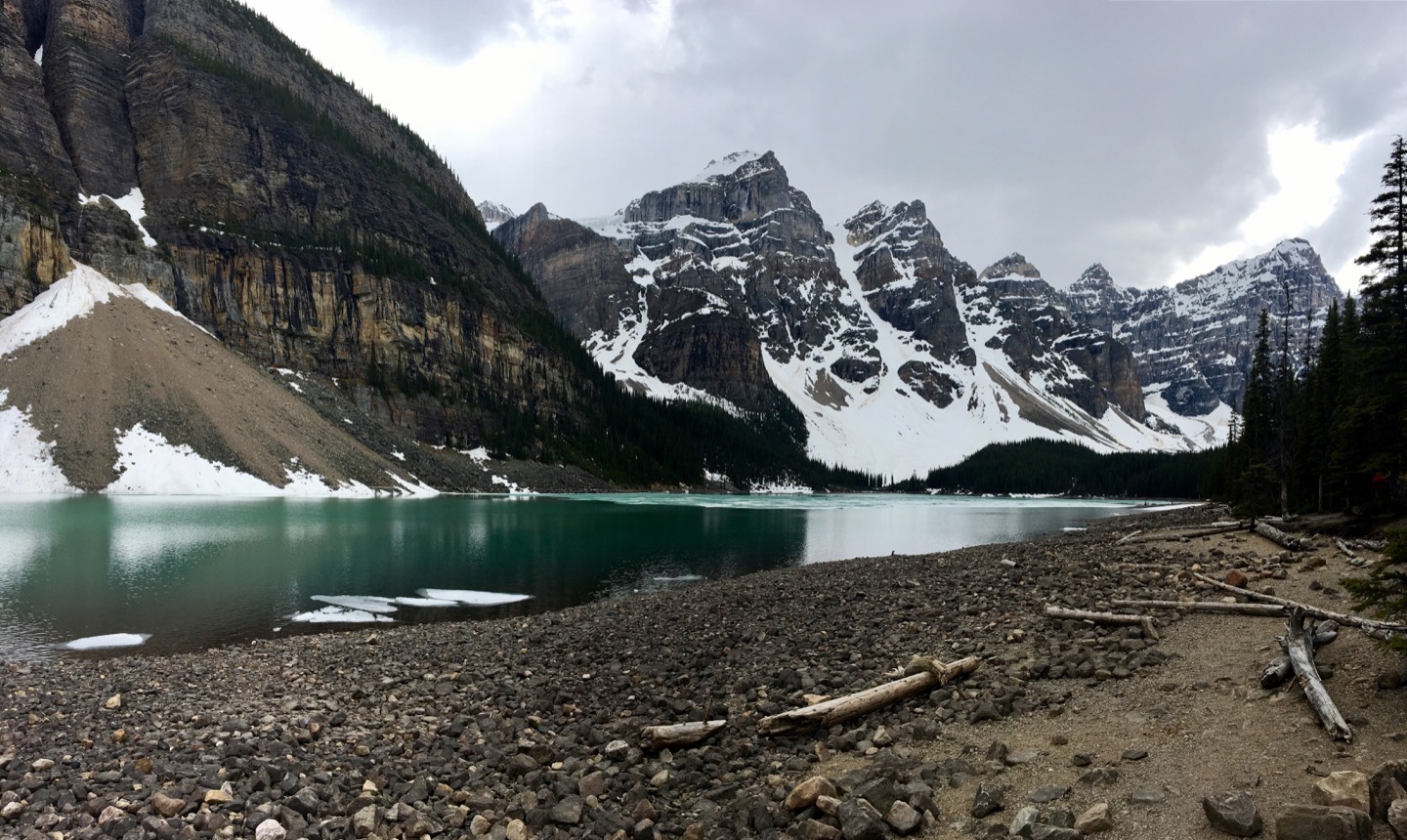 To celebrate the 150th Anniversary of Canadian Parks, admission to all Canadian Parks is free this year. Including the famous Banff National Park.

We drove into the park from Calgary, Alberta Saturday afternoon. Our first stop was the Natural Cave on the west side of the town of Banff. Banff - the town - was a beautiful, quaint town. It reminded us a lot of downtown Jackson Hole and Breckenridge. We didn’t stay in the town long as we were nervous about parking our coach in a tight space in such a busy place. The Natural Cave was beautiful but underwhelming. Much like Rock City, it turned out to be just a small place that is a quick walk in for tourists. The small cave and spring was beautiful, but small and crowded. If we had had to pay extra for it, it would have been disappointing. Fortunately the free admission also applied here.

After leaving the town of Banff we headed up to Lake Louise to try our luck at getting a camping spot. The hard-side camping site had plenty of openings and we lucked out and got an end spot right by the river. The Lake Louise campground we were in was hard-side only, which meant only RVs and camper trailers. No tents. The spots had power hookups but no water or dump. We slept with the windows open and would have left the door open if we weren’t concerned about bears. The campground attendant had mentioned they saw two in the campground earlier that day before we checked in. This campground had a well set up dump station with multiple lanes. Each lane had a spot to dump and fresh water.

We made Moraine Lake our first stop and were surprised to find that part of it was still frozen! In June! It was crowded on the shore and at the lookout point. We managed to squeeze into a clear area near the water for a few photos before we walked down the trail towards the end of the lake. There were a lot less people further down the trail and shore around the bend of the lake. Even partly frozen the water is a beautiful light blue. Almost a powdery robin’s egg blue. I wish it had been warmer so we could have canoed and enjoyed the water. The day before it had been fairly warm but today was overcast and sprinkled on us a few times.

As we walked back towards the parking lot, we saw some emergency vehicles pull up in the parking lot. A visitor had fallen on the far side of the lookout point. We didn’t go up the lookout point because of the crowds but from the side we were on you can see that it’s very rocky and can be dangerous if you aren’t careful off of the trail. A helicopter had to come and lift the injured person out of the spot they were in. From where we were parked I could see the helicopter lift up. It had a rope attached to the gurney, and an emergency responder stood on the gurney hanging on the rope as the helicopter moved them to safer ground by the ambulances. We didn’t hear how they fell (we mostly assume they did because of the rocks), but we hope that they’ll be alright.

Lake Louise was our last stop in Banff before heading north. The water was the same beautiful powdery blue as Moraine Lake. We had initially planned to hike here, but the temperature was dropping slightly and rain looked imminent. We spent a bit of time here on a bench looking out over the lake. Some brave souls went out in canoes and kayaks.

Driving through Banff and Jasper National Parks is probably the most beautiful drive I have ever taken. Mountains line either side of the highway and there are frequent river crossings and lakes. In Jasper along Hwy 93 we saw a few caribou right off the road. While we were taking pictures one looked right at Ben in a way that made Ben quickly move back to avoid irritating him. We had already seen him get pushy with the other two caribou with him and we wanted to give him ample space.