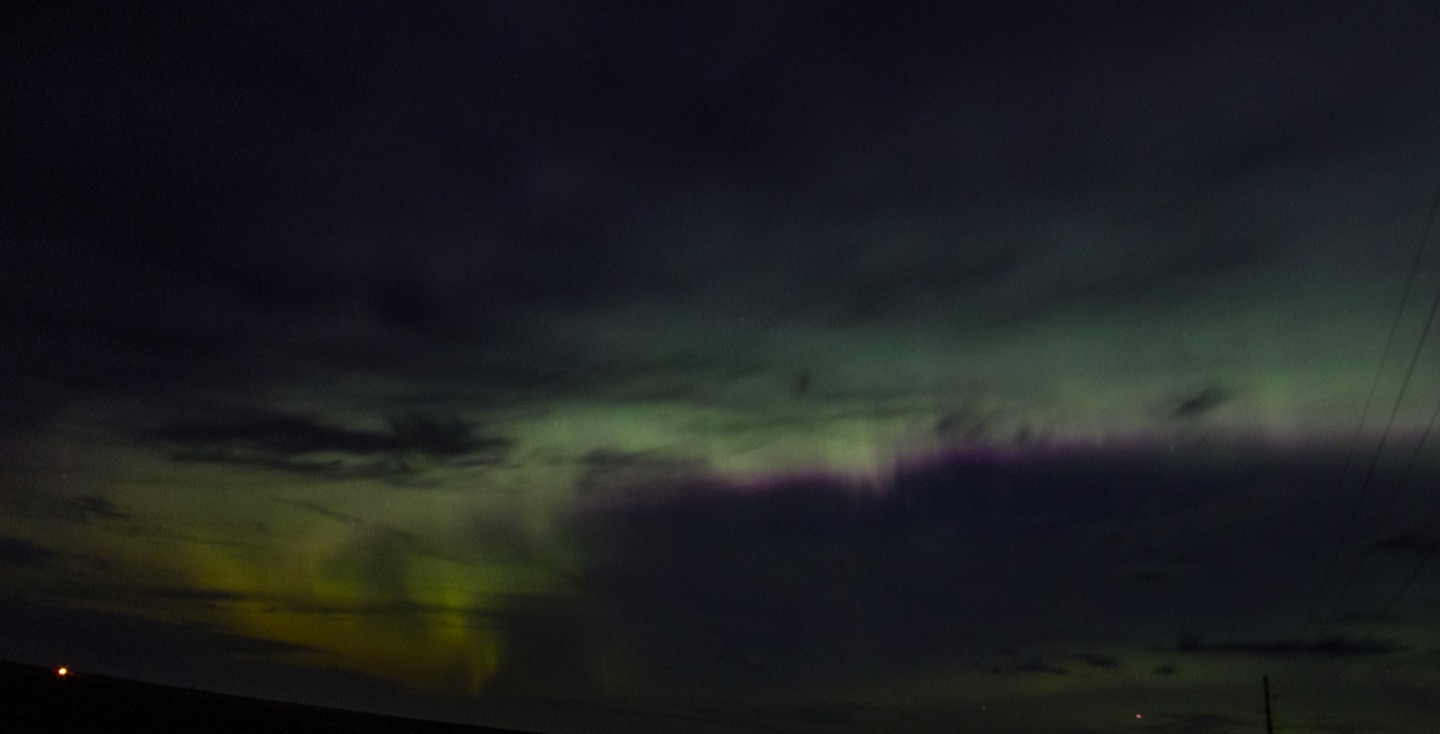 Just a few hours before getting to the Montana/Canada border, I had been mentioning to Ben how I wanted to see the Northern Lights before I die.

Last night we arrived at the Wild Horse Border Crossing only to find it was closed. We had the option of driving four hours out of our way to cross at a 24 hour crossing, or find a spot along the road to sleep for a few hours. We went with the latter and I couldn’t be happier that we did.

While we drove north on Hwy 232 in Montana I saw a strange white light in the sky that we couldn’t describe. There were no nearby towns to blame. It didn’t look like the milky way. In a way it looked like a cloud, only it was the sky itself that had a light to it. I kept watching the strange light talking out loud mostly to myself trying to figure out what it was. Eventually I convinced myself it must be the Northern Lights. Ben thought I was crazy. I thought I was crazy because I didn’t realize they appeared as far south as northern Montana. I thought they only happened in northern Canada, Alaska, or the Arctic regions.

We found a small gravel turn off to park in for the night just 5 minutes south of the border. Fortunately, we parked facing North so I had a perfect view of the white glow in the sky. In the dead silence I kept staring. Watching and waiting to see if anything would happen. Then all of a sudden, I saw a shift in the light and got Ben’s attention. I excitedly pointed the light out and exclaimed that they were in fact the Northern Lights. How did we get so lucky? Ben got out his camera and we went outside. While he was getting the camera set up and framed the shot, I squealed like a little girl on Christmas. I even jumped up and down a little bit.

Turns out we happened upon a rare light storm so late in the year. It was a truly breathtaking experience for me to watch the lights dance. Suddenly there would be a green light, and the more it moved, the more color would show. As far as we could tell we were able to see the whole show from our quiet spot. If we had decided to turn south and cross over to the other border crossing or stop earlier in the night, we would have missed it entirely. I’m incredibly happy we got to witness the event, and that I got to cross off another bucket list item with Ben beside me.