This was the first day we had good weather in Vegas, and we decided to take advantage of it to do our routine cleaning of the van. 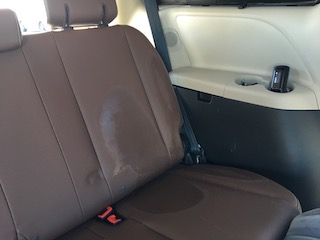 As we were moving our things around to fold up the bed and unfold the back seats (we stored it in the cargo area behind the back row of seats when not in use), we saw that a leak we thought we had gotten fixed a month prior was in fact, not fixed. The sheet we had hung to block out the back window was wet, the carpet of the floor under where the seats fold into was soaked, and some smaller cloth items left under it were also wet. Coming around the side of the van, we found that one of the seats also had an actual puddle of water in it. This being the first time we had unfolded the seats since hitting the road three weeks ago, we have no sure way of knowing just how long everything had been in this state, or just how bad the leak was. We also noticed that the back left seat was not latching down like it should when Ben used the buttons to unfold them, which concerned us.

Our van is a bit more of a special case than the typical car. Ben’s mother has worked for Toyota Corporate for the last 20 years, and one of the perks of being an employee for that length of time is that you and one of your direct family members (spouse, parent, or child) can lease a car through Toyota Corporate. For our travels, we had decided to go that route when selecting a vehicle. Cheaper, it comes with insurance and coverage on maintenance/tires, and as a single man, Ben could still say he didn’t technically own a minivan. This being the case, and that it was a Saturday and we were only four hours away from where his mother lived, and therefore where we could get it to a trusted Toyota mechanic, we decided to pack back up and immediately head west.

We try to use Waze as our primary GPS. If we end up using Google Maps for the route itself out of convenience (their search beats Waze), we at least keep Waze open on an additional device. Waze, if you have never used it, has the advantage of taking you on the fastest route through a city, and more importantly - of showing other drivers road alerts, including the location of cops. On the drive down I-15, we happened to end up not far behind another Wazer that kept throwing up false flags along the route. Construction where there wasn’t any, vehicles on the side of the road where, again, there weren’t any, and alerts for police ahead. Doesn’t seem like that big of a deal, but after a few hours, it can get rather frustrating. 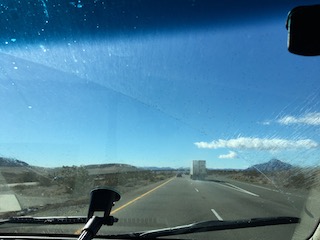 It was a cloudless day as we drove, so when we suddenly started getting a decent amount of raindrops on our windshield, we were pretty confused. Turns out that ahead of us, there was a semi whose trailer was topped with a sheet of snow that had just started to melt. As he drove along, all of that snow suddenly started coming off of the roof and essentially causing a small downpour for the drivers behind him. I’m not sure where he drove through to collect so much snow, but when it was ready to melt, it all happened at once.

Once we got to California, we met up with Ben’s mother and emptied the van out in her garage. Before we took the van to the dealer, we still wanted to be able to vacuum it out and run through a car wash to see if we could get video of the leak. I sat in the backseat while Ben drove the van through the wash, and was able to get a video of what ended up being a pretty substantial leak directly over where the buttons are to stow the backseats. A month prior, we had taken the van to AutoNation Toyota here in Austin, and found out that there was a dent under the plastic molding on the back door, as well as under the seal itself. From the looks of it, we’re guessing someone had tried to shut the door with a tool or something wedged in there before the plastic was ever installed. We had the tech there adjust it as best he could, but it apparently didn’t make much of a difference.

The techs at the Orange dealership we took the van to in California were all really nice guys, and helpful. We were able to show them the photos and videos of the leak, as well as a video of the backseats not latching in properly. Fortunately, the backseats not latching in to the floor ended up solving itself, and we weren’t able to reproduce it at the dealership. We’re assuming that it may have been caused by the gears or wiring being wet under the seat, and once it dried out a bit it started working as it should. It does, however, look like we’re going to need a new back door, which means bodyshop and paint. It’ll be a while before we can get our home back. :(